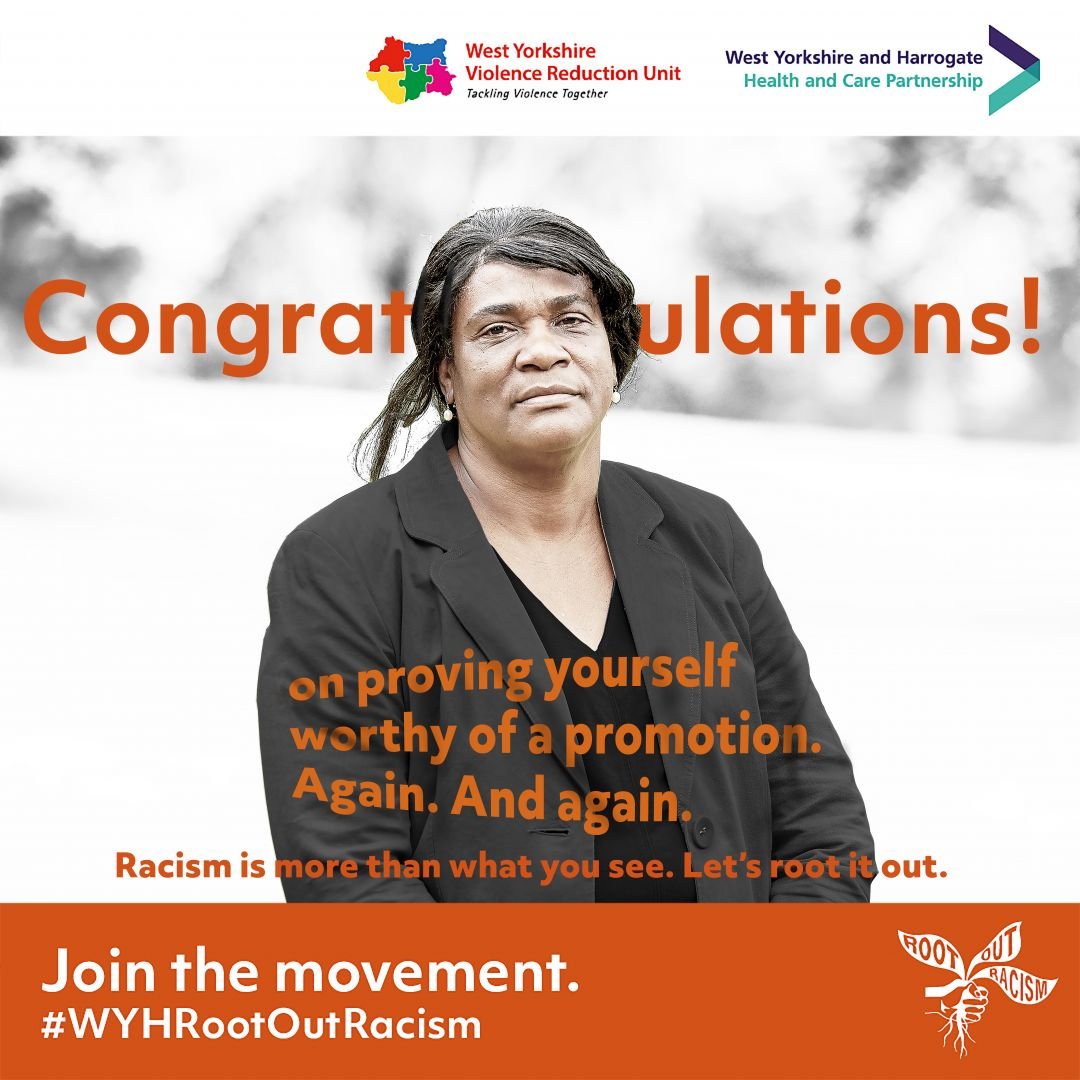 “I’m getting way more stares, people looking at you just because of your skin tone. I’m being faced with racism from kids who are 5-6 years old. Of all racism I’ve encountered, that’s probably the most shocking, that’s the racism coming from kids.”

“Stereotypes, assumptions that are made about me as a Black man, professionally or socially. Simple things like when I go on a bus, being the last person to be sat next to, or when the cashier puts the change into people’s hands but when it comes to you, she puts it in the counter.”

In 2021 we set out to create an anti-racism movement.

Root Out Racism is a movement co-created by over 100 West Yorkshire and Harrogate Health and Care Partnership ethnic minority colleagues. It aims to proactively challenge racism across all aspects of society, to improve health inequalities, and to help individuals and organisations alike to become actively anti-racist. Put simply, to prompt us to look at ourselves and to better inform ourselves on anti-racist behaviours, to stand up against racism, and to stand together. It is about representing yet another step toward meaningful and real change. It is about anti-racism.

Make your pledge to Root Out Racism

We pledge to act and show there is no place for racism across our region.

We are proud to stand alongside our colleagues and root out racism. Join us. No barriers, no excuses and only one commitment. Whether it’s posting on social media, wearing a pin badge, or having the courage to speak up against racist behaviours, you are the movement. You can root out racism. To publish your pledge and to receive a free Root Out Racism pin badge to wear with pride, email: westyorkshire.stp@nhs.net 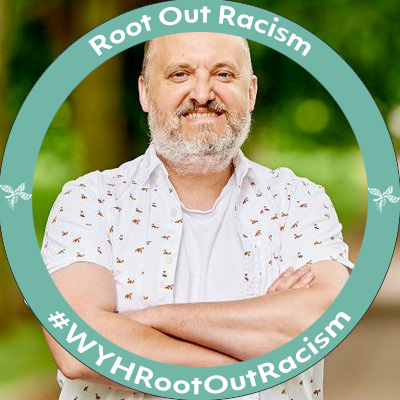 We also have a 'Twibbon' you can use on your Twitter or Facebook profile picture to show your support. To get your twibbon, visit https://twibbon.com/Support/wyhrootoutracism and follow the instructions.

Background to the movement 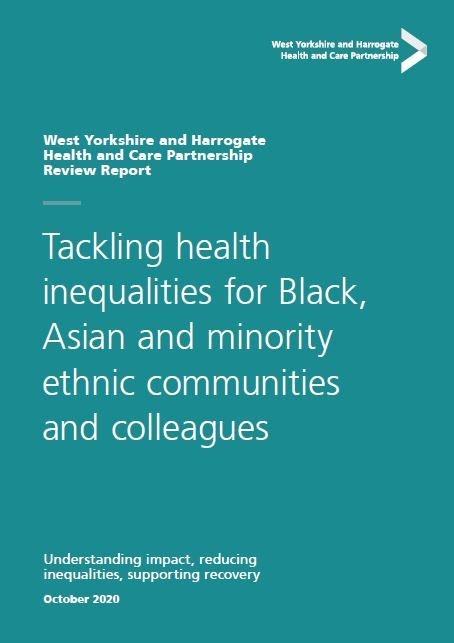 Everyone deserves the same opportunities to lead a healthy life, no matter where they live or who they are. Yet, evidence shows that people from ethnic minority communities continue to face health inequalities, discrimination in the workplace and are more likely to develop coronavirus (COVID-19) and die as a result of it.

In 2020, West Yorkshire and Harrogate Health and Care Partnership undertook a review to understand the impact of COVID-19 and health inequalities on ethnic minority communities and staff. The aim was to review existing work, to explore if this work was sufficient to address this impact and to identify recommendations for action to reduce this impact.

More information about the review, including a report into its findings

Click on the infographic to see the full, larger image

In our Five Year Plan, 'Better health and wellbeing for everyone', we listed 10 ambitions, with one of them being:

"We will have a more diverse leadership that better reflects the broad range of talent in West Yorkshire and Harrogate, helping to ensure that the poor experiences in the workplace that are particularly high for ethnic minority staff will become a thing of the past."

The Root Out Racism movement is part of our commitment to this ambition. 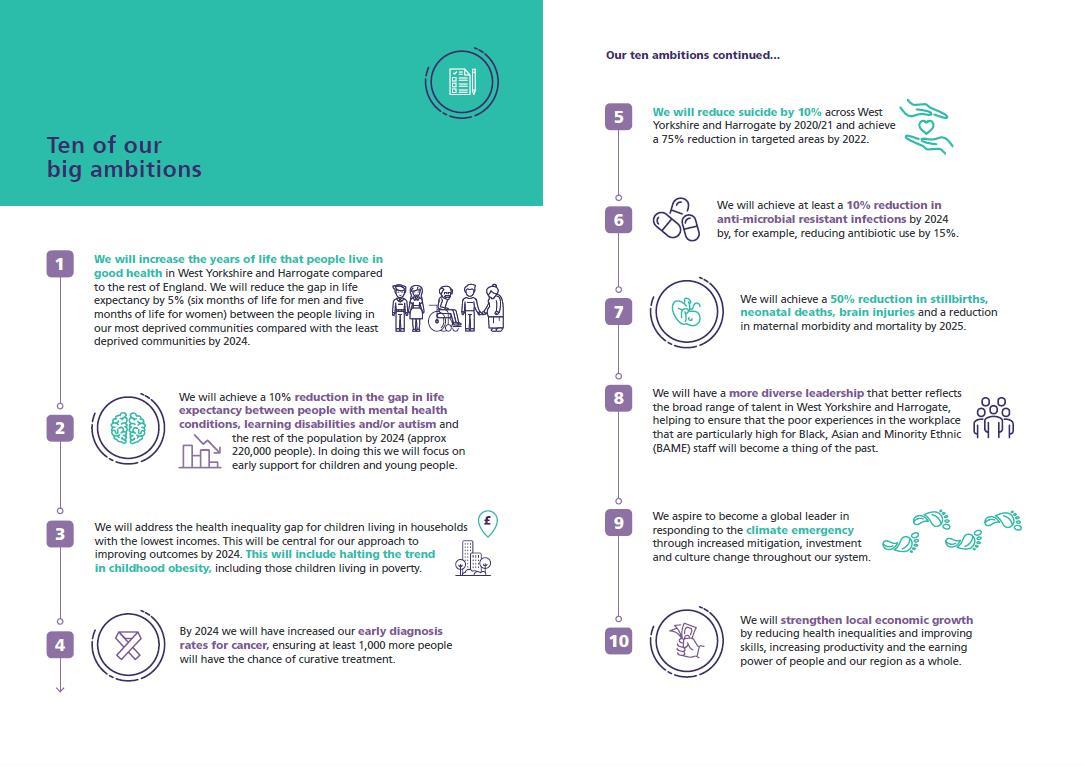